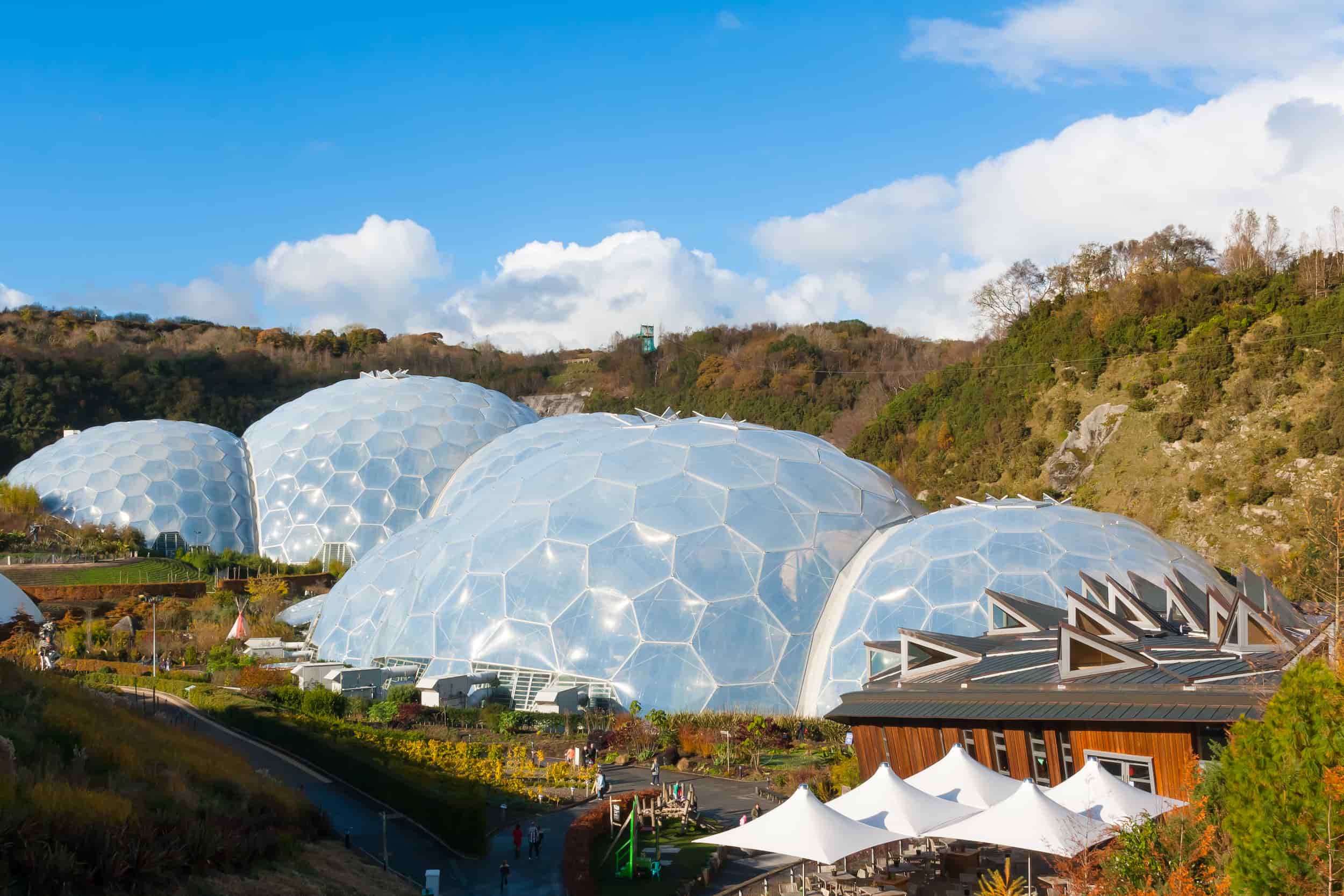 How Were the Eden Project Biomes Created?

In this blog, we will explore how the unique Eden Project was created and what it can offer for you on a tour to Cornwall. Read on to find out more now.

What is the Eden Project?

The Eden Project, based near St Austell in Cornwall, is the most popular visitor attraction Cornwall has to offer. Since its opening on 17th March 2001, it has welcomed over 20 million visitors! The Eden Project allows you to immerse yourself in Tropical and Mediterranean biomes, with a fascinating look at diversity, ecology and much more. However, it is hard to believe that this innovative and unique destination was simply a hole in the ground; so how did it all begin?

How Did the Eden Project in Cornwall Begin?

Back in 1995, a former clay pit near St Austell was simply a hole in the ground. It was the time approaching the millennium celebrations, and the nation was full of hope and looking to the future. Along comes Tim Smit, who had previously turned the Lost Gardens of Heligan into a popular attraction. The renovations Smit masterminded at the Lost Gardens of Heligan planted a seed (excuse the pun). He wanted to develop a destination to showcase some of the most impressive and important plants globally. However, given the nature of these plants, they would require a site of Jurassic proportions. A massive hole in the ground, a former clay pit no less, would prove to be the perfect site!

Initial biome designs were sketched in a traditional format – on the back of a napkin in a pub (most likely in Cornwall). The architect firm, Grimshaw was brought on board to bring the sketches to reality. At this point, the famous ‘bubbles’ of the Eden biomes were imagined.

When Was the Eden Project Built?

‍What are the Eden Project Biomes Made of?

The biomes are undoubtedly what Eden Project is all about and famous for around the world. There are two vital and separate areas within the biomes, the Rainforest biomes and the Mediterranean biomes, which are linked by a further biome. This network of iconic structures is constructed of a steel structure with plastic hexagonal panels. To get technical, the all-important panels are made from ethylene tetrafluoroethylene (ETFE), with two panels trapping air between, much like the same way which double-glazing works in homes. The Rainforest Biome is twice the height of the Tower of London, which gives some idea of the scale and complexity of the biomes.

Where are the Plants from?

The first Rainforest Biome plants were planted in 2000, and it is an incredible operation to turn this sparse space into a rainforest! The Rainforest biomes create the largest indoor rainforest anywhere in the world. It has over 1,000 species of plants held in extremely humid condition between 18-35 degrees.  Plants come from a wide range of sources, including many from the Eden Project’s seed nursery and others from across the globe, including research stations and botanic gardens.

What Else is at the Eden Project?

The Eden Project has undergone a continuous series of innovations and is now much more than the original vision. There have been new additions in recent years, including the Canopy Walk allowing visitors to walk amongst treetops on a rope bridge. There have been many education initiatives, including exhibitions on palm oil and sustainability and even a dedicated school workshop space.

Recently saw the addition of the Hangloose Adventure, which allows visitors to take the ‘SkyWire’ Eden Project zip wire, a ‘giant swing’ and other adventure pursuits.

The Eden Project offers seasonal events and attractions, including a popular ice rink over winter and a spooky party at Halloween.  Since 2002, the summer season has seen hugely popular concerts at the Eden Sessions events, which has attracted many world-class artists, including Stereophonics, Paul Weller, Oasis, Lionel Richie, Tom Jones and Kylie Minogue.

How Popular is the Eden Project?

What About the Future of the Eden Project?

The Eden Project continues to innovate with new developments on-site and new initiatives. The site has struggled with the impact of the COVID-19 pandemic. However, the innovative nature of the Eden Project, combined with the popularity of the attraction, means it will indeed continue to thrive. One such creative venture is the plan for a 'Life Support Academy', a plan to establish a Natural Philosophy Laboratory and Future Living Village to help us combat the Climate Crisis and understand how we can all live more sustainably through innovative science. In addition to this, the Eden Project will continue to offer fantastic events such as world-class artists to the Eden Sessions. If you have previously visited the Eden Project, it is always worth a future visit due to the site's progressive nature.

What Else is Near the Eden Project?

The Eden Project is located near St Austell, meaning there are plenty of other fantastic places to visit in Cornwall. This stretch of coast is often referred to as the Cornish Rivera due to the abundance of picturesque towns and villages along the coastline. One such destination close by is the historic port of Charlestown, which is also owned by the same owners as the Eden Project (and also happens to be the home of Cornwall Discovered). In St Austell Bay, you can also enjoy some of our fantastic Cornwall Discovered Beyond the Bay day experience.

Along the St Austell Bay and around Cornwall’s South Coast, you can also find an abundance of beaches and harbours and coastline walks, taking in some of the most stunning scenery you will find anywhere in the UK.

If you would like to visit the Eden Project as part of a self-guided tour in Cornwall, please take a look at our tour now and discover what you can explore in addition to the fantastic Eden Project.

Please get in touch if you would like to discuss your Cornwall tour further.