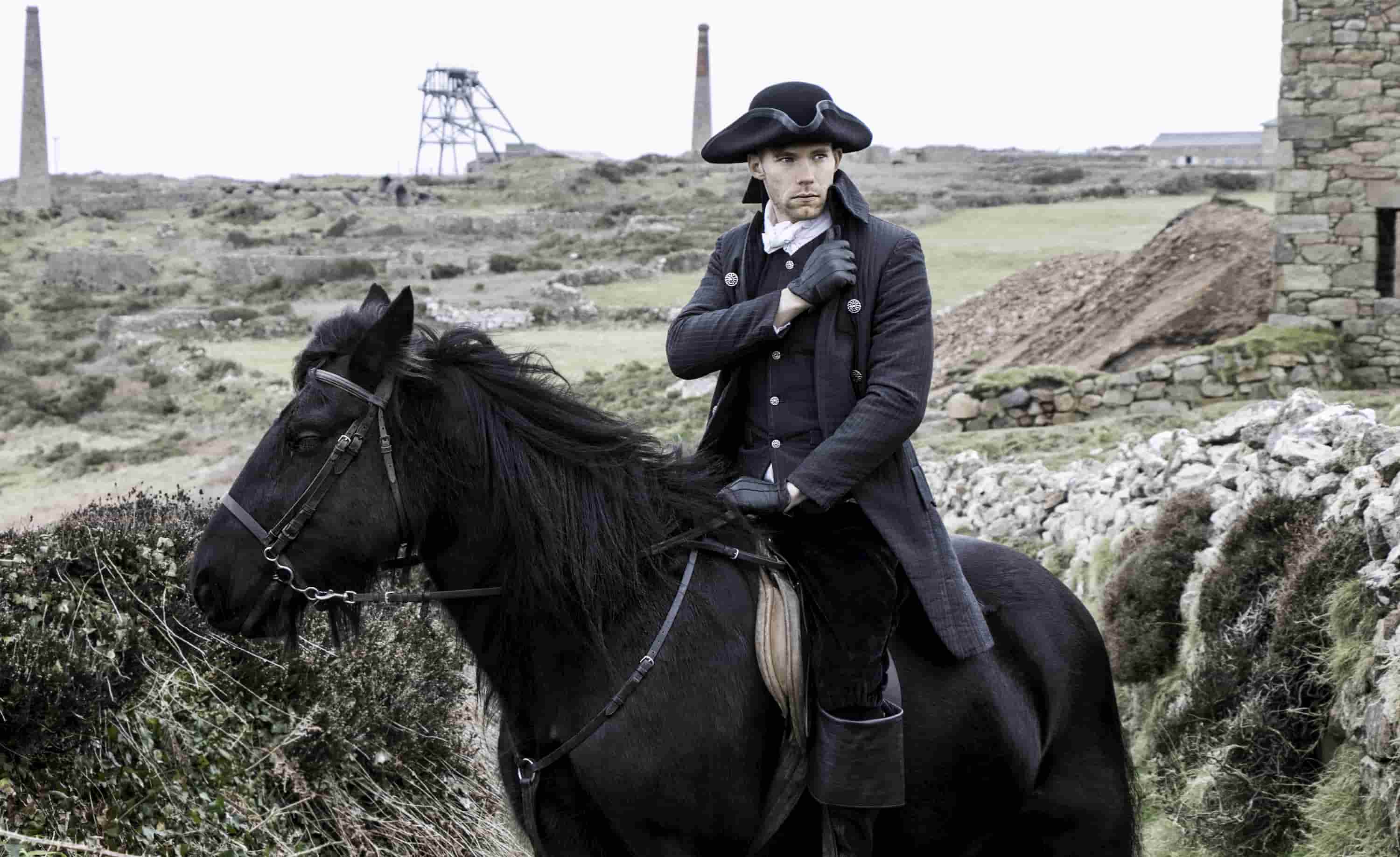 Poldark is an incredibly successful period drama set in the 18th century, produced by the BBC over five series and a whole 43 episodes. The series Poldark TV series is based around the twelve novels by Perranporth based author Winston Graham. The main character, Ross Poldark captured the hearts of many (especially a growing female fanbase), and his quest to reopen the family derelict copper mine. One of the enormous impacts of Poldark has been the showcasing of Cornwall – the epic vistas, the mining heritage, and unspoilt beaches. But how much of Poldark the programme matches reality and where is Poldark filmed? Read on to find out more.

Is Ross Poldark a Real Person?

Spoiler alert - Ross Poldark is not a real person, at least the story is not based on a true story of someone names Ross Poldark. The series is fictional. However, Poldark is a real Cornish name, and the tales the series tell are loosely based on actual events. Tin and copper mines are indeed a real facet of Cornish history of that era. While the whole series may not be based on fact, many aspects will substantially mirror the Cornish life of the 18th century.

Where is Poldark set?

Poldark is set in Cornwall, South West England. Cornwall is one of the most unspoilt and beautiful places in the UK, as demonstrated by the TV series. However, despite the perfect and rugged landscape, until relatively recently, Cornwall was the world-leader in tin and clay production, combined with a rich sea-faring history. As such, Cornwall has a rich heritage and a strong cultural identity. The Poldark TV series showcases Poldark set in some iconic Cornish locations.  Read on to find out more about the Poldark location and the real-life version, many of which have remained unchanged since the Poldark-era.

Although Truro today does have a port of sorts, nothing quite matches the unspoilt authenticity of UNESCO Charlestown harbour. Home to tall ships, this setting evokes scenes from Georgian Cornwall, and hence was the perfect setting to demonstrate a bustling port in the Poldark series. The Poldark recreation mirrors what Charlestown would have been like in its heyday – a major port exporting tin and clay from nearby St Austell. Charlestown was once a fishing village called West Polmear and was purchased and renamed Charlestown, by you guessed it, a fella named Charles Rashleigh – well, wouldn’t you name a port after yourself if you bought it? If you visit Charlestown today, you can climb aboard the tall ships, explore the fantastic Shipwreck, Rescue and Heritage Centre or take in the setting while sipping a cocktail or latte in one of the increasing numbers of trendy bistros. Charlestown is a popular filming location, also featured in Hornblower, Mansfield Park, Alice in Wonderland, Doctor Who, The Eagle has Landed, to name but a few. Discover more about our Cornwall film tours.

The setting for fictional Warleggan Beach is Holywell Bay in real life. This National Trust owned beach is famous for the two rocks just off the beach, known as Gull Rocks, or officially Carter’s Rocks. These rocks and the sweeping bay, towering cliffs and dunes add a fantastic, dramatic feel to the Poldark scenes. It was a popular place for Ross and Demelza to ride their horse in the Poldark series. The name 'Holywell' derives from the Holy Well that can be found in a cave at the northern end of the beach. It is worth a trip to see the unusual rock formations of the holy well, thought to be blessed by St Piran, hence becoming a 'holy' well.

Located on the southernmost tip of the UK, a mile from Lizard Point is the idyllic Kynance Cove, owned by the National Trust. Kynance Cove is said to be the most photographed spot in Cornwall.  It is easy to see why with the insanely stunning setting of dramatic rocks sheltering turquoise blue seas – this looks like a Caribbean paradise. A few scenes from Poldark were filmed here, including Ross and Demelza landing in a boat into the cove. The dramatic cliffs of Kynance Cove were also used in a scene involving Poldark being marched to prison. This cove can become very busy, so while we highly recommend visiting, try to avoid peak dates where possible. A fantastic little café on the beach is worthy of a visit when open.

Rivalling Kynance Cove as the most photographed spot in Cornwall, Porthcurno and Pedn Vounder is an Insta-friendly spot certainly has that ‘wow’ effect! Incredibly rugged and unique cliffs and rock formations, turquoise seas, and golden sands, what is not to love? The Pedn Vounder side of the bay (joined to Porthcurno at low tide) featured in Poldark as the fictional Nampara Cove. The spot was already becoming popular, but this added fame did lead to this spot becoming swamped in 2018. So please do visit but try to avoid peak dates. If you are visiting Porthcurno, make sure you visit the equally breath-taking Minack Theatre – an open-air theatre braced on the cliffside overlooking the bay. Porthcurno also lays claim to some crucial modern history, being the first location in the world where telecommunication cables were laid between the UK and USA. Visit the excellent Telegraph Museum to discover more about this hidden part of history that changed the world from this unsuspecting part of Cornwall.

Located near Lands’ End, this is a genuinely Cornish, unspoilt gem. One of the most famous scenes in Poldark was set here, with Demelza spying on Ross while he took an early morning swim. This scene instantly made this once unknown spot famous. Set near Lands’ End, a short distance from Porthcurno, this tiny cove offers rugged cliffs which flank a sandy beach and steep slipway. Crystal clear waters make this look an inviting place to take a dip.

Gunwalloe is used in various beach scenes in Poldark, as is a little nearby cottage near Gunwalloe for Dr Dwight’s cottage. Gunwalloe is located on the edge of the Lizard peninsula and is a sweeping bay, with a real-life history of 17th-century shipwrecks and pirates’ treasure. Dollar Cove got its name through a shipwreck in the 17th century known where a Portuguese shipwrecked. This shipwreck cast its cargo of silver dollars overboard and onto the beach, hence the name Dollar Cove. Locals claim to find silver coins to this day still, so take a metal detector if you visit. It is easy to see why Dollar Cove was used as a place smugglers were thwarted in the Poldark series.

Wheal Coates was known as part of the Nampara Estate in Poldark. Probably the most photographed Cornish tin mine, Wheal Coates is genuinely a fantastic location to visit. It has a towering tin mine set high on dramatic cliffs above a gorgeous sweeping beach below. Wheal Coates is truly a spectacular location and is National Trust owned so you can visit Wheal Coates. Read more about our Heritage and History day experiences.

Bottalack is another breath-taking tin mine owned by the National Trust located near Cape Cornwall and Lands’ End. It is fitting that this dramatic location was used as the ‘Wheal Leisure’ setting in the Poldark series and became an iconic feature of the series. This is a theatrical site, with an engine house perched on a rock jutting out to sea. You can explore the whole mine site, and while there soak up the epic vistas toward Cape Cornwall to the south and St Ives Bay to the north.

There is a real mine named ‘Poldark Mine’. Strangely, this tin mine, located near Helston was renamed Poldark Mine from Wendron Forge in the 1970s after the first series of Poldark aired. This mine was not featured in the most recent series of Poldark. It is claimed that the Poldark Mine is the cradle of Cornish tin mining, with mines dating back hundreds of years.

This part of Cornwall is strikingly different from the dramatic coves, cliffs, and beaches of other parts of Cornwall. Therefore, this location was able to be depicted as an entirely different country in the Poldark series. In the series, an escape was made to France, and Turnaware Point posed as France for the landing spot. In real-life, Roseland offers some of the most incredible places in Cornwall, with estuaries banked by green fields and forests, to tiny fishing ports and even world-class, but hidden dining venues. The Roseland is one of the most surprisingly impressive parts of Cornwall, and completely unspoilt.

This is not an exhaustive list of the Poldark filming locations, other sites in Cornwall include:

If you want to experience these sites on a Poldark tour in Cornwall, discover our Experience Days and visit some of these sites with some unique experiences added in to create memories that you will never forget.