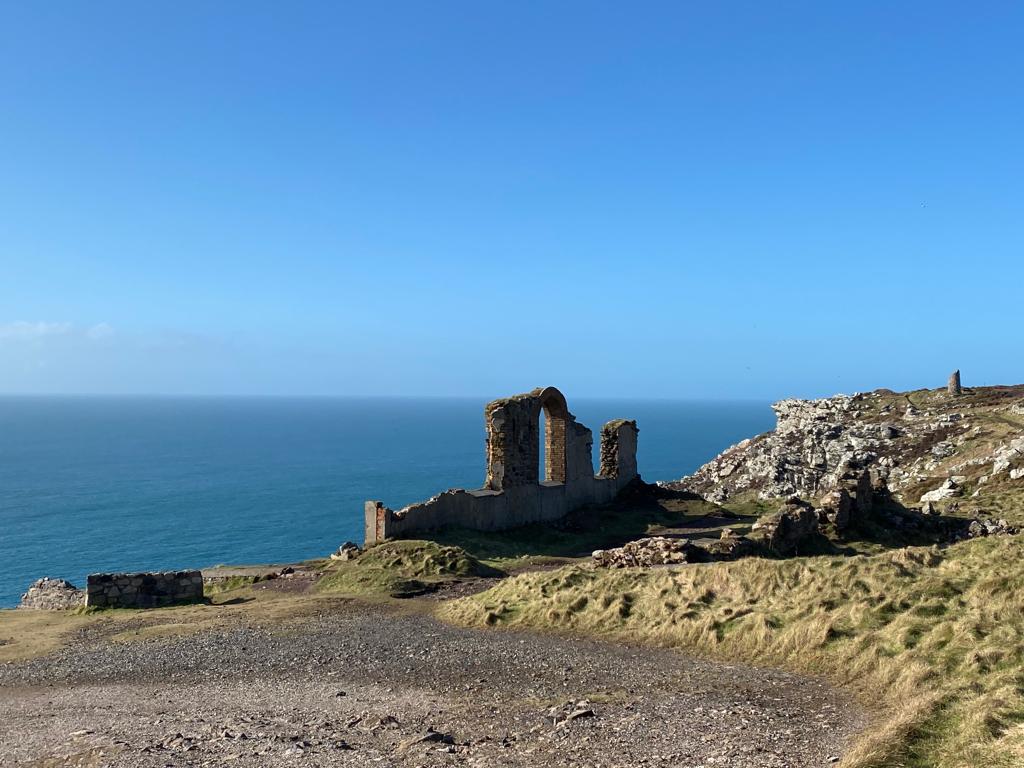 How Tin and Copper helped to grow Cornwall’s subtropical Gardens

The most photographic landscape - Coast versus land

March 2022 started off very mild but quite windy, so I had to hold on to my hat when I walked down to the Falmouth Hotel to meet my guests for my first tour of the season. Cornwall Discovered was looking after a group of Bernard Magee Bridge Players, and I was asked to guide them around our beautiful duchy of Cornwall.

Our first day took us to Botallack, a small village on the north coast of Cornwall and one part of the 10 big mining areas that form the UNESCO World Heritage Site Cornwall and West Devon Mining Landscape. Veins of tin and copper form a dense network of ore within the granite that you would find mainly in the very southwest and south of Cornwall. It formed millions of years ago when molten lava rose to the surface and hardened. We know that already Phoenicians and Romans traded with Cornwall for copper. The heydays of Cornish mining however, started in the early 18th century when Cornwall was soon to provide two thirds of the worlds demand of copper and almost an equally big amount of tin.

We took a scenic drive via the historical town of Helston, famous for its spring festival Helston Flora Day and the magical view from the sea resort town of Penzance onto the island of Saint Michael’s Mount caused many 'oooh’s and aaah’s' from our guests. After a good hour’s drive our local Hopley’s coach turned into the little lanes of Botallack. You immediately think that time has stood still in these parts of Cornwall. Low bearing grey glistening granite cottages nestle together along the road. Tall hedges, which are actually solid stone walls, frame the road and take the view from any car, yet in the coach we have a prime view over the fields and coastline. The road became rough, and a few deep potholes shook everyone awake again as we rolled into the carpark of Botallack Mines area which is now owned and managed by the National Trust.

Engine houses are romantic remains of a technical industry

The Botallack mines were operated from the early 17th century onwards until 1895. The area still features the remains of various engine houses, a calciner to burn the arsenic containing ore, a cooling-off labyrinth, the round ‘Buddles’ to separate tin and stone dust and many water pits. An extraordinary masterpiece of technology was also the now lost diagonal shaft next to the famous Crown mine engine houses at the bottom of the cliff right above the waterline. It became famous nationwide in Victorian times when tourists were taken underground in the train via the diagonal shaft and in doing so copying the Royal couple Edward, Prince of Wales (later King Edward VII) and his wife Alexandra.

After a walk around the top to understand the processing of tin and copper we walked the 10 minutes down to the two engine houses clinging to the foot of the two rocks called 'The Crowns’ which gave the mine its name. The lower one was used to continuously empty the mineshaft from ingressing groundwater, the higher one operated the train and mineshaft. The views were breath taking. Although we had a south wind at the time waves were crushing into the Zawn, the Cornish word for little steep cove cliff. And the sunrays were dancing on the crystal clear turquoise sea. It was hard for us to leave the site.

Our return trip brought us to another part of the World Heritage Site, the area around Camborne and Redruth. Camborne used to be the home to the Camborne School of Mining, the institution to go to if you wanted to become a mining engineer. The saying is that wherever in the world you see a deep hole you will find a Cornish miner at the bottom, so strong is their professional reputation. After the collapse of Cornish Mining at the beginning of the 20th century a lot of Cornish Mining families emigrated to all other parts of the world.

The hill of Carn Brea towers tall between the two towns and is crowned with the Cornish cross shaped monument in honour to the important local mine and landowner Sir Frances Bassett. The family made their fortune through mine operations within the Great Flat Lode area. The two valleys either site are full of derelict engine houses, an impressive sight. We finished the day with a song of the Cornish anthem ‘Trelawny’ and the ‘Oggy’-shout.

Back in the 18th and 19th century Cornwall was one of the richest areas in Europe due to the Mining industry. But what did all the land- and Mine owners spend their money on? The answer for Cornwall is: manor houses and subtropical gardens.

Cornwall benefits from the warm waters of the Gulf stream, blessing us with relatively mild almost frost free winter and moist summer, hence the subtropical climate. Some of the guests had been to Cornwall before but for the others Cornwall’s green garden lushness and range of spring flowering shrubs let their cameras click nonstop. On our second day we drove a short while to nearby subtropical Trebah gardens. The garden is a legend. Bought by the local shipping agent family Charles & Sarah Fox in 1838, it was designed as a Victorian plant collectors garden. Its position on the banks of the river Helford offers a view to die for. For a moment I didn’t really need to talk to the group anymore as the garden was speaking for itself. With the old manor house in our back we were standing on the main lawn, looking down the 70m drop towards the sea. Both garden sides flanked by tall beech and pine trees giving wind shelter, whilst in the middle rhododendrons, acacias, hydrangeas painted a colourful V-shaped view towards the Mallard pond, beach and across the Helford river.

To tip the iceberg, whilst we were admiring the garden ‘painting’ a sailing boat just passed by and adorned the visible blue water of the Helford river. Of course, with a twinkle in my eyes I made out that this was all purposely arranged. We took a gentle stroll down to the beach and here and there I pointed out the plants like the Chilean myrtle tree (Luma apiculata) with its cold cinnamon coloured bark or the already most colourful red, white, pink or yellow flowering tree rhododendrons (Rh arboretum). The alien looking Giant Rhubarb field (Gunnera mannicata) impresses equally as the broad fanned canopy of the Treefern leaves (Dicksonia antartica).

Coming back to our Edward, Prince of Wales. On his tour through Cornwall he had also visited Trebah Gardens and the head gardener did his utmost to impress with his wonderful lush bananas. He was awarded a golden guinea and almost sacked the next day. What had happened? Well, in his eagerness to please he had forgotten to point the apparently homegrown ripe bananas the right way up on the tree and also to take the price label off. Ooops!

I think quite a few plants and seeds left Trebah garden shop today to end up in our guests own gardens.

We all had the most wonderful time together!

You can find out more about our historical tours here - First group of the year will be running this September and we can't wait to welcome you to Cornwall!